Ae Fishery was established over fifty years ago and is dedicated to the production of quality restocking fish, primarily in the south of Scotland, to complement its parent company's distribution in the North of England and further afield in all directions!

The late Rob Mackie established Ae Fishery's reputation over a fifteen year period until his death in 2007. Rob pioneered a system of grading fish into three quality bands to encourage fisheries to be able to provide anglers with the finest fish it was possible to produce in a farmed environment. This absolute desire for quality remained as the foundation of production when Ae Fishery was bought by Brow Well Fisheries Ltd., now trading as NORTHERN TROUT. Under the umbrella of Northern Trout, Ae Fishery is part of one of Britain's largest producers of restocking fish, specializing in: Rainbow; Blue and Brown Trout; not to mention Brook, Golden and Tiger Trout.

Part of Ae's success is that it utilises gravity feed from the water of Ae, using about 3 million gallons of water per day! The water flows through ponds built rather like "links in a chain", passing from one pond to another so that the maximum amount of water passes through each. We know it is this fast flowing water, over the natural gravel substrate of the ponds, which results in fit fish that thrive in as near-natural conditions as possible.

Whilst the near-natural conditions are protected and improved year-on-year, the Ae Fishery and Barony sites have been able to enhance their mechanical operations too: For example, the acquisition of modern transportation vehicles benefiting from the latest oxygen monitoring systems; ensuring the optimum environment for the delivery of fish - from our farm to your fishery.

Not content with only the Ae Fishery farm near Moffat, we requisitioned in 2017 a fabulous site previously owned by The Barony College, "The Old Carse of Ae" known as "Barony". Matthew Baxter, Manager and his team have spent a huge amount of time and money enhancing this site so that from the following year in 2018, they had almost doubled the cubic capacity of it's sister site of Ae Fishery. 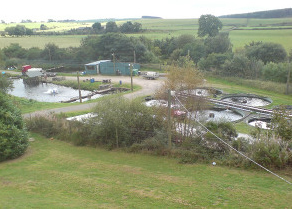